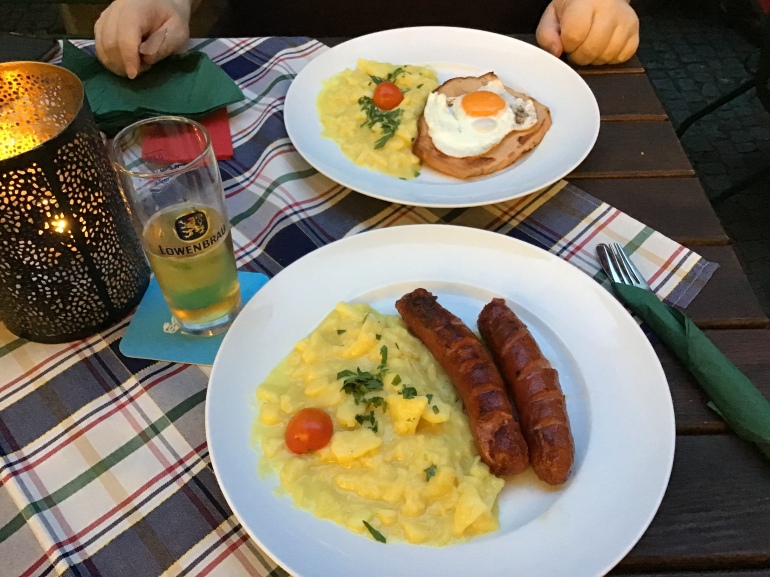 Going to Europe is not really what I expected. There are a lot of differences such as language. Germans don’t drink tea. People’s behaviour is different eg everyone is much more abrupt but there is less obvious anti social behaviour. Also Munich is rich. Most everyone drives a BMW or Merecedes and wears designer clothes. Lots more people ride bikes. In Britain it’s warfare between cyclists and motor cars but here everyone gets on. The cities are much more urban. Like they admit they are cities and have all the facilities, there is street culture. In Britain people are suburban and focussed on their little houses.

Yeah so lots of differences. Our hotel is in the Eastern stretches of Munich. There is not much at the hotel (a holiday inn). We Uber into the city. Here Uber is different as the drivers don’t rely on the computers and will break out of their route. It costs about €10 to go downtown. The centre is Marienplatz with a lovely gingerbread townhall and buildings from a studio Ghibli movie.

I feel a bit like everyone you meet from Uber drivers to waiters is trying to put a positive gloss on life. It’s a bit like it’s an “anyone can make it” culture where poor people admire rich people like Vladimir Putin because of their cunning. A Nigerian taxi driver told us how he nearly died from overwork In Germany. Another female Uber driver described competition between taxis as “sometimes your the dog sometimes your the tree”. I don’t like the word ‘normals’ but it seems like when you are travelling you encounter ‘normals’ culture. Like everyone, even people who nearly died because of it are indoctrinated into capitalism and think if you just bust your butt hard enough you can be one of the Mercedes driving dudes. It’s also because when you are travelling it’s expensive and you need ready cash all the time. Not many people are willing to barter, trade or give stuff away. I know I’m repeating myself but it’s like a world where poor people admire rich people and inculcate their values.

I wanted to comment on your earlier long email. I wonder all the time “what is the point of life”. I also think maybe you are discounting some stuff. If people read and are moved by your poetry or zines it’s not nothing. It really is important. I know because in the literary world it’s all about “big names” like Toni Morrison who just died but I don’t think you should discount the importance of your own ideas. The stuff like with Mary Oliver or Toni Morrison is kind of like a publishing marketing behemoth. It’s a winner takes all system in which a few star poets reap profits and careers and everyone else is forgotten about.

I’ve really loved a lot of your ideas. Your ideas feel vital and alive. Your ideas breathe off the page. I know it’s frustrating because unlike the big poet stars you can’t really quantify how your writing influences anyone and it doesn’t even earn enough money to support the process. I once set up a patron page for my writing and my now ex friend was offended that I would ask for money to write. She said writing was free. But I don’t think it is. Writers need different things. For Virginia Woolf it was a room of her own. It could be time, space, stability but all this time and space has to be carved out of life and has a financial cost.

You also have to take the leap of believing your writing is worth anything at all. Blogging can be like writing into the void. I think being a writer is largely a recipe for poverty and perhaps misery. You can think of yourself as an artist but the world doesn’t recognise you as such. The world likes pictures of celebrities and bling anyway.

I also just wanted to address this point about capitalism. How it’s all pointless because everyone either drives an SUV or wants to drive an SUV and throws their McDonald’s wrapper on the road. Yup. I think the world is incredibly conformist. You see it in how people converse. People don’t actually communicate. It’s pre programmed scripts about the weather or football or dieting or holidays.

I think there have been points in history where people sought to “fight the power” such as Spain in the 1930s where they tried to create an @ society in a whole country. Of course it was crushed by outside intervention but the idea still sparkles as a possibility. However in today’s world of smartphones, online gambling, online shopping, junk culture I think people have far less culturally today even if they are richer. The mass culture is junk. Whereas those Spanish peasants or people working in factories in England worked 12 hour days and the came home and studied and attended lectures.

I think maybe the betrayal of the Russian revolution has harmed idealism. Now anyone can just point to socialist countries and say ‘it doesn’t work’ and look at places like North Korea and they’d be right.

So where do we go?

I think eventually the current phase of toxic hyper capitalism will burn itself out and then people will need your zines and my blogs and gaudi’s architecture and Spanish peasants dream. The soil of the earth will have been made so toxic it will actually be fertile territory for these dreams.

It’s like Le Guin said about bread. We just have to continue making it everyday. Just keep the dreams alive, hand them on until someone can use them.

Please check out my blog. https://fallingleaves197988517.wordpress.com/